By African Impact FoundationMarch 25, 2019No Comments

Salut, hola, hallo, hej, ciao, hoi, hei, g’day… You got it, if you’re reading this post in a country where English isn’t the official language, you might be interested.

First of all, let me introduce myself. I’m William (aka Touille), doing a three-month internship with the African Impact Foundation and my time here in Cape Town is sadly slowly coming to an end. Most importantly, I come from France, which means that I only have a scholar English level, I had never lived in an English-speaking environment before and believe me, this isn’t as hard as I thought it would be.

As I studied close to where I live I never had the opportunity to spend a lot of time away from home before coming here, which made me want to live an adventure like this one, to discover new environments, new people and live things that you wouldn’t even think about when you’re at home. All of this sounds really cool and is basically what volunteering or interning with African Impact is all about. But there was one big issue: the language barrier! A few months ago (it might be your case right now while you’re reading this) I was at home, wanting to go on this trip but afraid of going there on my own and not being able to keep up with conversations or struggling to interact with anyone else. I ended up deciding to throw myself into it, fly 9000 km away from home and now that I’ve been here for a month I can tell you that it certainly is one of the best decisions I’ve made so far. Here’s why.

“When I landed here my feelings were mixed between excitement, fatigue due to the long flight and anxiety realising that I was there, alone in a foreign country having to think twice about everything I say to find the right words.”

Even though all of this sounds really cool I have to admit that my first week was a little bit daunting. When I landed here my feelings were mixed between excitement, fatigue due to the long flight and anxiety realising that I was there, alone in a foreign country having to think twice about everything I say to find the right words. The feeling of being alone went away as soon as Kaylee and Bridget (two lovely staff members) picked me up from the airport and introduced me to the other volunteers and the staff members at the House. During this first week I was one of only 2 persons that didn’t speak English as a first language, and that’s where the daunting part comes in. You have to be aware that the first few days are difficult in term of getting used to hearing and speaking another language all the time. As an example, we went on welcome drinks in a bar on the first night and with all the people in there, the music playing, the fatigue etc keeping up with all conversations was complicated. 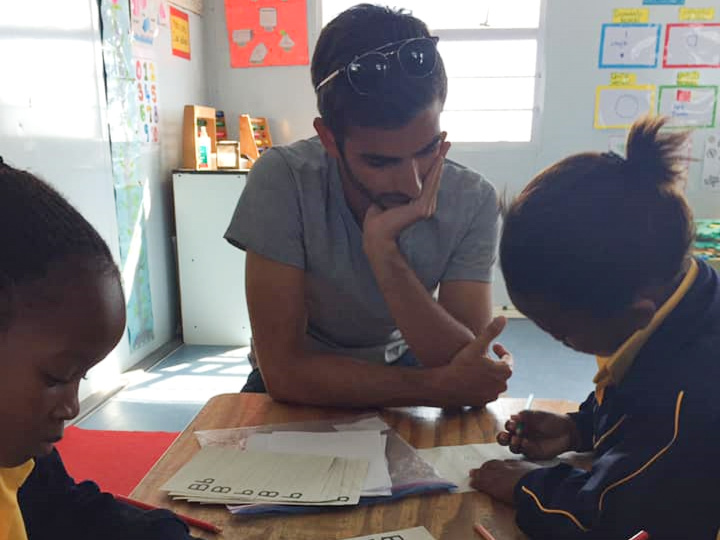 But thankfully for me and for you future volunteers/interns, this lasted only a couple of days. Once you get used to it, you realise that no one judges you, your accent or your mistakes (yes, you’ll do some and it’s perfectly fine) and that having all those native English speakers with you is a real asset to make you feel comfortable and confident, as they will help you if you’re struggling to speak or to understand something. Furthermore, living with all these lovely persons is a fantastic way to share beautiful moments, discover other cultures and create life-long memories with people coming from all around the world. And when it comes to interactions on projects, there will always be some other volunteers with you and a staff member to make sure that everything is going well.

Doing an internship was also part of my concerns as you’re more involved than the volunteers and you have to be able to understand everything that’s going on as much as being understood. By now you should be expecting what I’m about to say so yes, all the tasks that you’re being given are also part of everything that helps you enhancing your English level and having more confidence. The intern role implies amongst other things having to speak in front of others (don’t worry no one is expecting you to be Barack Obama and speak full of confidence in front of millions of people) for different reasons, which running a workshop on the foundation for the volunteers is part of. It can seem intimidating but the volunteers are people that you know and that once again won’t judge you for your speaking abilities. This workshop is actually a thing that I really enjoyed doing because not only being a good speaking training it’s also an opportunity for you to raise awareness about really important topics that the foundation is dealing with. One of my tasks was also to help with the organisation of the GAPA trip, which implies having to get in touch with different companies. This can also seem like an intimidating task when you’re not confident with your speaking capacities but the outcomes are only positive as you’re contributing to the organisation of a wonderful event while having every staff members and fellow interns (if you’re lucky enough to have a Team Intern in the House) helping you in those tasks.

To sum things up, after having spent nearly three months here I can tell you that my abilities to speak and understand English have increased a lot (although you Australians are still giving me a bloody hard time) and that you shouldn’t be afraid of it but look forward to it as an opportunity to excel in a foreign language. Doing this internship has been a way for me to gain more confidence in speaking English and not being ashamed of my accent or mistakes, as well as making an impact on concrete issues and making new friends from all over the world with whom I now share unforgettable memories. Once you’ll get there, don’t hesitate to take part in conversations and don’t be afraid to make mistakes or to ask someone to repeat; the language barrier will rise in front of your willingness to come and make your impact!